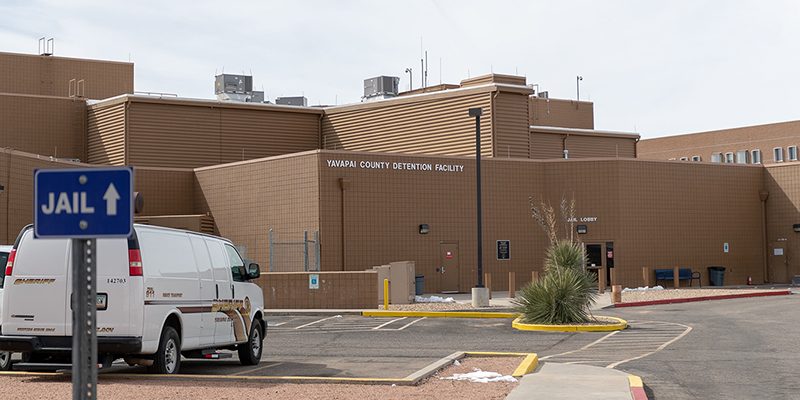 This article was posted by JournalAZ.com on February 27, 2019.

In 2015, administrators in the Yavapai County Sheriff’s Office made a startling discovery about the county jail. Of the 492 inmates in county detention that year, 52 percent had been diagnosed with a mental health problem for which they had been prescribed medication. Seventy percent had problems with substance abuse. Many of these inmates were in jail for minor crimes, often nonviolent ones.

“It was a systemic failure and it still is,” YCSO Chief Deputy David Rhodes, who oversees jail operations, said. “All over the state and all over the nation, mentally ill people spend longer times in jail than people without mental illness. And they have a harder time getting out.”

In Rhodes’ view, the jail was failing to adequately address the needs of many who came through it, in a way that was not only a disservice to those inmates, but also to the jail’s resources and to the wider community. Many of those who entered the jail ended up committing crimes again after they were released, returning to the county jail before long. Some even escalated to more serious crimes over time.

“Let’s say you committed aggravated assault on people and you should go to prison,” Rhodes said. “Well, what happened before that? How many times did you have contact with the criminal justice system? What did we do to connect to the system to give you treatment? What did the system do to figure out necessary resources? What can we do so that wouldn’t lead to you committing a violent crime?”

That year, the county jail started screening people for mental health issues when they entered and began a program of connecting them to services upon their departure that could help them avoid re-offending after they leave.

Dubbed the Reach Out program, the jail’s anti-recidivism initiative has only grown from there, as it has received grants from numerous places, including the Federal Bureau of Justice Administration, the Northern Arizona Regional Behavioral Health Authority Institute and the state of Arizona. In March 2018, the jail started recording detailed statistics on its inmates to monitor the effectiveness of the program and, in July, it hired Beya Thayer, a social worker who was previously the Justice Liaison at Health Choice Integrated Care.

Reach Out has partnered up with numerous local services that already work to help with mental health, substance abuse and homelessness in the county by trying to get them involved earlier on, as soon as an inmate is released; these services include Southwest Behavioral and Health Services, Spectrum Health Care Group, West Yavapai Guidance Clinic, Angie’s House, the VA, US VETS, Veteran’s Services of America, Catholic Charities, the Arizona Health Care Cost Containment System Administration, the Coalition Compassionate Justice, the Arizona Department of Economic Security, MATForce and Big Brother’s Big Sisters. The program is voluntary, but by offering connections to organizations that can help with housing, treatment, food and sometimes even employment, the jail is able to convince many inmates to sign up.

“What’s happened, which is great, is that they’ve realized that people who are in incarceration need support,” Angie Lozano of Angie’s House said. Lozano said that before the program was implemented, many inmates would inevitably end up at her shelter, but would often spend a week or two on their own first, which could lead to other low-level crimes or serious difficulties if they needed mental health or substance abuse treatment. Under the current system, people who need housing can be quickly paired up with providers who can help.

“They’re literally released out of the door, into a van to Angie’s House, which is huge because it saves the one to two weeks where they kind of flounder in the community,” Lozano said. She said she is in contact with the jail two to four times per day. “Now that one to two weeks has been solved, and now they’re actually in a place where they can at least catch their breath to figure out what’s their next step.”

Once inmates are out of the jail’s custody, the jail checks up on them with the service providers they partnered with — once after 30 days and then again after 90 — to see if a former inmate has made progress.

While efforts to lower the incarcerated population in the United States have spread throughout the states and to the federal government, Reach Out is somewhat unusual in focusing on the county jail, instead of state or federal prison. Jails house inmates for much shorter periods of time — often brief periods before trial or sentencing, and often for lower- level crimes.

According to Rhodes, jails in Arizona release 220,000 inmates a year, compared to just 19,000 for the state prison system. In his view, if the state prison system is going to make reforms to try to lower its incarceration rate or help inmates reenter society after being released, it is perhaps even more important for county jails to make the same kinds of efforts.

As far as Rhodes and Thayer are aware, “Reach Out” is the first program of its kind in the country. They note that it is still very much a work in progress. With the data gathering only having started in 2018, they are not able to properly measure the effectiveness of the program.

Administrators are optimistic about the effects of Reach Out based on what they know so far. Rhodes pointed to a drop in the jail population by 10 percent in 2018 compared to the year before, for the first year that the project was fully operational.

“Where we are successful is learning how to have conversations with someone in one of worst moment of their life about what risk factors that they have,” Thayer said. “We’re becoming more successful in how to translate that to the court. We have something that we are able to offer the justice system which puts everybody at the table. We’re able to say, ‘we now have this tool — what’s the best way for you to use it?’ Those conversations, they measure a huge amount of success.”

“Our hypothesis is that if they stay engaged, they’ll stay out of jail,” Thayer said. “They can get back on their feet.”

Categories: In the News, Locations, PrescottFebruary 27, 2019