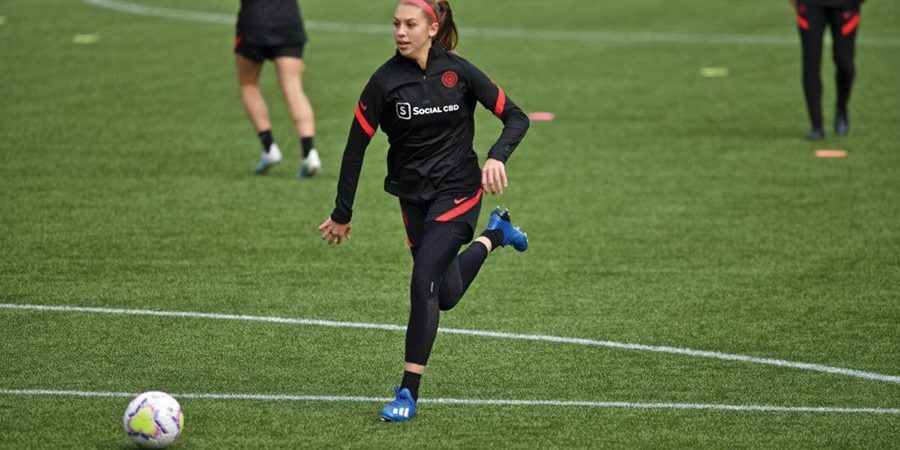 This article was posted by The Lewiston Tribune on March 27, 2020.

There was the Portland Thorns FC organization, which made a late move on the draft board to claim the second pick — and eventually Weaver, the University Place, Wash., native and third-team All-American forward out of Washington State.

The only shock Thorns personnel encountered was that they pulled it off, coming out of a three-team pick swap with a player they envision a particularly bright future for.

“I’m still managing to get my head around the fact we got Morgan Weaver at No. 2,” said coach Mark Parsons, quoted in a draft-day piece from the team. “… The fact that we could get into that position is probably our biggest achievement.”

And in no way whatsoever were the crimson and gray faithful back in Pullman surprised. Top-two probably sounded about right to them.

The Cougs extol the career of the captivating, well-rounded striker who guided WSU to its best-ever season — a spot in the 2019 women’s College Cup as one of the NCAA’s top four teams — and forced the national soccer scene to acknowledge her.

Three months later, Weaver resides just outside The City of Roses, “a perfect fit for me” which has played host to the two-time NWSL champion Thorns since 2013. Like many, Weaver has had to lie low recently. She trains, studies her new team and finishes online courses toward her degree as the sports world searches for answers amid the spread of the coronavirus.

“At school, it’s like, ‘I’m with you 24/7,’” said Weaver, who only got about a week of practice in with her new team before the NWSL scrapped its preseason. “I haven’t been able to build that relationship yet with the players. I can’t wait to get to know them a bit more. I’ve started watching their old games and highlights, and just what they do, to see how I can fit in.”

Sparked by a record-tying four-goal outing on senior day Nov. 3 against Colorado, Weaver tallied 10 goals in her final eight matches after a relatively slow start to the year. She already was a regional star before then — the Cougars were at one point ranked in the top 10 in her junior season, when her pro dreams began to materialize.

Parsons saw WSU’s No. 2 all-time scorer (with 43 goals) go red-hot in the NCAA tournament, becoming a viral soccer sensation. She chalked up a goal and an assist in a win against No. 3 Virginia; scored two goals in seven minutes in a runaway, 3-0 toppling of West Virginia, then opened the College Cup semifinal game against second-ranked North Carolina with a long-shot strike in the seventh minute.

“I loved being the underdog; I loved people doubting us,” she said. “Everyone was calling us ‘Cinderella,’ but I’ve gotta be honest, I didn’t think we really were. I thought our team could do that, because of our heart and grit, and it happened.”

During the astounding run, Parsons saw a combination of magnetic and spiriting personality, tenacity — a drive to beat everyone to the ball — along with high-level pacing, handling and a strong leg.

“I was there live watching probably two of the best center-back partnerships in the country not know what hit them during the College Cup semis,” he said. The 21-time champion Tar Heels eventually won that national semifinal game 2-1 in San Jose, Calif. Weaver pulled the team together afterward, telling them, “No one should be upset with themselves.

“… This was proving that WSU is on the rise, and it won’t stop.”

The Thorns already were somewhat familiar with Weaver, who they were now completely invested in. She scored a game-tying goal against them in the 2018 Thorns Spring Invitational, when she suited up for the U-23 U.S. team. They scouted her again in December, when she was called up to train with the U.S. senior team in Florida just three days after her season ended.

How Weaver interacted and competed with soccer veterans, which she said helped speed up her development, must have been enough for Portland to ensure it didn’t miss her on draft day.

“It was shocking and amazing. To hear my name called was a blessing and a dream come true,” she said. “I always wanted to play close to home. It means my hard work has been shown 100 percent, but I’m not done yet. My goal is to be myself and give Portland everything I can.”

For her success, Weaver credited many. WSU coach Todd Shulenberger and Co. “pushed me, and I always asked them to push me.”

She remains close to her former teammates, and shares a daily conversation with current Cougar Sydney Pulver.

Her favorite memory of the tournament was from a teammate — Mykiaa Minniss’ game-winning goal in overtime against No. 5 South Carolina on Nov. 29 in the quarterfinal round — and the ensuing delight. Their historic soccer team was honored at halftime of the Feb. 1 men’s basketball game against Arizona.

“Toward the end, it was more of a family,” she said. “When they showed that video (at halftime), it was sad. I felt like, ‘It’s gonna be hard to leave these people.’”

In her limited participation with the Thorns, Weaver has taken a role as pupil to some of the more tested players. It’s been an entirely new experience, but the support from and bond built with Wazzu is unwavering. She’s had Coug fans reach out to tell her they’ve purchased season tickets for the Thorns.

“I mean, wow, they’re gonna continue watching me just because I went to WSU?” she said. “They should always wear their Coug gear, because I want to talk to more of them.

“I owe it not just to coaches and the team, but the fans and community at WSU, and what they’ve done for the program. … The way our community picks each other up, I’ve never seen that anywhere else. You can’t get that anywhere else, that family culture.”