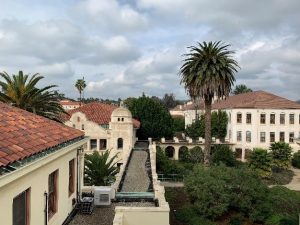 Washington—Senator Dianne Feinstein and Representative Ted Lieu (both D-Calif.) today introduced the West Los Angeles VA Campus Improvement Act, a bill that would allow the West Los Angeles VA Campus to use proceeds from property leasing to build additional housing for homeless veterans. Under current Department of Veterans Affairs regulations, the West LA VA can only use lease proceeds for campus beautification.

“Homelessness – including the major problem of homeless veterans – is one of the biggest challenges California faces,” said Senator Feinstein. “Increasing capacity for supportive housing is essential to any solution to this crisis. For more than a decade, my colleagues and I have worked to ensure the West Los Angeles VA campus supports as many veterans as possible, and this commonsense fix will help ensure that happens.”

“As a veteran, I know firsthand how important it is to ensure our veterans receive the support and care they need. From my first days in Congress, I have made it a priority to improve the West Los Angeles VA, which for too long failed to serve our veterans in the manner they deserve. I introduced the West Los Angeles Leasing Act in 2016, which was signed into law, and started the necessary process of rebuilding trust between the VA and our veteran community. I am pleased to partner with Sen. Feinstein on this new piece of legislation that will build upon our previous work by ensuring the millions of dollars that rightfully belong to the VA can be recouped and used to build housing for homeless veterans and for campus improvements,” said Representative Lieu.

“Senator Feinstein’s bill will clarify that the VA needs to spend money collected from leases and easements on housing. I am deeply grateful that our elected leaders understand this need and are fighting to prioritize financing for veteran housing which is, first and foremost, the solution to veteran homelessness,” said Dan Garcia, CEO of Vets Advocacy, the non-profit charged with facilitating implementation of veteran housing at VA West Los Angeles under the landmark Valentini settlement.

“Homeless veterans in Los Angeles are on the precipice of meaningful change in their housing prospects,” said Stephen Peck president of U.S.VETS and partner of the West Los Angeles Veterans Collective which was selected to develop more than 1200 housing units on the sprawling West Los Angeles VA campus. “The changes in Senator Feinstein’s legislation will ensure that these units get delivered more quickly, and the services provided to the veterans living in them will be even more robust.”

The West Los Angeles VA Campus Improvement Act amends the original Act to clarify that leasing proceeds may be used for the construction of additional housing.