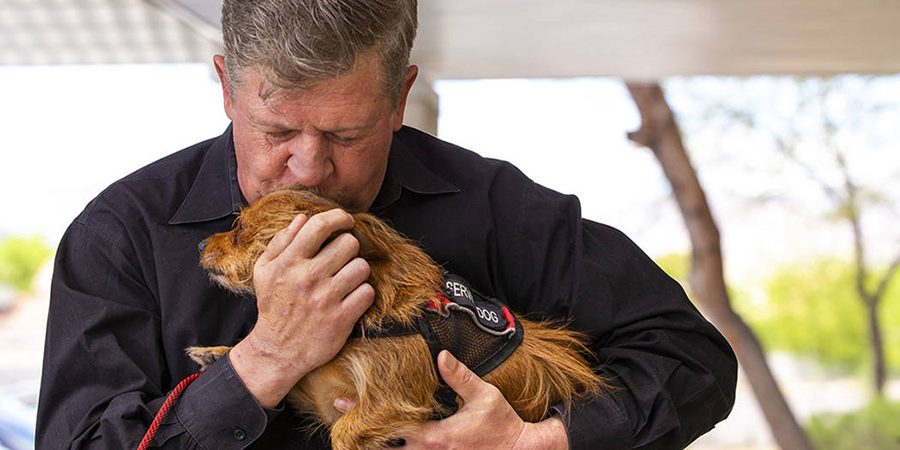 This article was posted by the Las Vegas Review-Journal on May 6, 2019.

A year removed from living on the streets of Las Vegas, Army veteran Ronald Cochran kept to his usual routine last week on the morning he was to take another big step in his comeback — his first day of work in seven years.

He took his mixed-breed terrier, Cookie, for a walk and treated her to extra cookies before dressing all in black, except for a forest-green hat with a gold Army emblem pinned to the front that he slipped into his left back pocket. Then he walked to his new job at a nearby barbecue restaurant in Las Vegas.

His new relationship with the 9-to-5 wasn’t built to last, however. In less than a week, he was jobless once more after being fired for not reporting for his 2 p.m. shift.

Cochran, 50, was sheepish about his slip, but vowed to continue trying to rebuild his life.

“I haven’t been on that bicycle in years. There’s going to be bumps in the road, I’m going to fall off,” he said. “It’s to be expected.”

Cochran’s stumble is not atypical for veterans, especially those who have experienced homelessness, as they attempt to readjust to the regular schedule that most jobs require, said Rashida Williams, workforce coordinator for US VETS, a Las Vegas nonprofit geared to helping homeless and at-risk veterans.

There are no statistics showing how veterans who have hit the skids fare when they try to return to the workforce, but experts say they face multiple challenges when they make the effort.

It’s often difficult translating the skills a veteran acquired in the military to a job that might not challenge them in the same way, Williams said.

“It’s almost like a puzzle trying to piece together what works for them with a civilian position that can take those skill sets and advance them,” she said. “It’s also about reintroducing them to the work world and work responsibility.”

Williams operates a program through US VETS that is designed to prepare veterans for work and help land them jobs through partnerships with local casinos and businesses. She said it is modeled like a workplace, in which veterans are accountable for deadlines — a tenet constantly reinforced.

It’s not that veterans who have been out of work don’t want a job, she said.

“Our homeless veterans have contributed to society, and that same mentality drives them. They just want a chance,” Williams said.

Experts say mental and substance abuse issues — some of them acquired during their time in service — also are an issue for some veterans. Lack of transportation can be, too.

Johnathan Pearson, a peer support specialist at the VA Medical Center in North Las Vegas who was once a homeless Army veteran himself, said getting veterans back into the workforce also takes patience.

“You want everything that took you that long to lose all at once,” he said. “I had to keep working hard to get where I’m at. There were many obstacles.”

Sometimes, a veteran has to take a minimum wage job.

“I’ve seen veterans that have 10 jobs before they find the right one. Sometimes, they have to put their pride aside,” he said. “My first job was cutting chickens. At the VA, I was a janitor before I worked my way up.”

Cochran traces his descent to 2012, when he lost his job at a local security company. Health setbacks, a messy divorce and, starting in 2013, chronic homelessness, followed.

He recalls that during the latter period, while trying to secure housing through HUD-VASH, a subsidized housing program for veterans, he’d often spend his days on the side of the road, holding up a cardboard box in the shape of a fish. “Homeless veteran. Fishing 4 survival,” it read. He said he made $40 to $80 a day.

He got off the streets temporarily, but faced another setback when his fiancee, Kimberly Bedell, died in 2017 after being struck by a pickup truck in a crosswalk on Boulder Highway. She was on her way to a job interview. More than two years earlier, Cochran had proposed to her with a makeshift engagement ring he bought from a toy vending machine, at the Walmart on Nellis Boulevard where they met.

He and Cookie camped in a tent behind a barbershop off Nellis Boulevard and Tropicana Avenue. In the mornings, he’d sweep his tent area with palm leaves and treat Cookie by sharing a $5.50 quesadilla and soda combination from a nearby taco truck.

Cochran’s homelessness put a strain on his relationship with his daughters, now 13 and 22. Once, his eldest daughter found him waking up in an empty dumpster pit by a store off Boulder Highway and Flamingo Road.

“Oh my God! Dad, is that you?” he recalled her asking.

He lost custody of daughters in the divorce and hasn’t talked to either in several years.

For Cochran, the $10-an-hour job at the the Smoking Pig BBQ Co. was his second chance.

“The old man’s still got something going,” he said proudly on a recent Monday morning, his first day of work. “If Kim were here, she’d be going nuts.”

He walked to work at the restaurant near Craig Road and Las Vegas Boulevard North, just across the street from his studio apartment, accompanied by his neighbors, Army veteran Christian Bridges, Rebecca Zima-Reinhart and their pet Chihuahua, Gibbs.

“No ticket for jaywalking, and if you do, I’ll take care of it,” Bridges joked as he took Cookie’s leash and they parted ways. Cookie panted and squealed and her nails scratched against the concrete as Cochran prepared to leave.

“You be good, OK?” Cochran said as she wiggled between his legs. “This is the key to getting more doggy treats.”

At the restaurant, Cochran shook hands with an airman who was already waiting to be seated. The owner, Paul Reddick, a four-year Navy veteran who served on the USS Kitty Hawk, greeted Cochran as he walked in.

“Thank you again for the opportunity,” Cochran said.

“You can make this happen,” Reddick responded.

He was reminded of one policy. If you don’t show up for your shift and don’t call, you will be terminated.

Then they got to work.

Reddick showed him how to cook brisket in the barbecue pit and instructed him on the rules.

If you’re looking, you’re not cooking. When rubbing the meat, apply half a spoonful of mustard first. The meat has to be good enough to stand alone.

“Our mission is to delight, not merely satisfy,” he told the new hire. “And when I can help a person change their life, it’s more important.”

Reddick owns three other restaurants in the San Francisco Bay Area, but this is his first in Las Vegas.

“Whenever someone comes in with an attitude that says ‘I can do it, I want to do it,’ it’s just desire and ability,” he said. “He wants the job, he’s ready to work, so let’s give him a chance.”

Cochran, who entered the Army on Nov. 27, 1987, served as a staff sergeant and in-flight mechanic at several stateside bases before being dispatched to Panama in late 1989 as part of the invasion that removed strongman Gen. Manuel Noriega from power. He also served two stints in the Persian Gulf. He left the service a few months after 9/11, because he said he feared going back to war.

“You can’t keep rolling the dice in combat, especially in a helicopter,” Cochran said. “I love my family more than I love my country. God, family, Army, country.”

Cochran always wanted to be in the military, even though his father, Eugene, who served in Vietnam, died by suicide just four days after Cochran’s seventh birthday.

He left Cochran a letter that he didn’t receive until his mother finally sent it to him while he was in the Army.

“No matter what happens in the future, no matter what financial situation you find in yourself, if you beat the human race or failed at the game and perhaps in the future if you become destitute, always keep this $5 bill in your pocket,” his father wrote. “At least you can never be arrested for loitering.”

His oldest daughter later framed the bill, and Cochran believes she still has it.

Often, when he was still sleeping on the streets, he’d think of that letter, Cochran recalled. To this day, talking about his father brings tears to his eyes. He was his Superman.

Reddick, the owner of the barbecue restaurant, believes in second chances.

He noted that he had hired Air Force members’ spouses to work serving customers. Another employee, whom he met at a bus stop, hadn’t worked in 16 years because of a legal issue.

The person who’s running all four stores was initially hired as a $13-an-hour waitress.

All his other employees are doing just fine, Reddick said, but sometimes it’s just the “minefield you walk when you take a chance on people.”

“There’s so much baggage these days that people who have been through hard times tend to change and carry stuff with them, and it’s not easy to shake and turn over (in) an instant,” Reddick said.

“There are also mental processes that go on that are not the same as a regular person seeking a job might be seeking. But it won’t stop us from trying to help.”

Kitchen employee Anthony McMahon, who trained Cochran on trimming the meat, said he used to live at the city’s Homeless Courtyard Resource Center on Foremaster Lane before he found a job and saved enough to move into an apartment.

He empathizes with Cochran, but added that he makes sure he punches the clock on time.

“I’m here to work,” he said. “I’m not going back to Foremaster again.”

Cochran, who was resolved to resume looking for work, got some good news late last week. More than two years after applying for VA disability benefits, he learned he has qualified at 80 percent disability.

Cochran declined to share how much he would receive from the VA monthly, but said that it’s enough that he wouldn’t have to return to work after all.

“I have regrets that it didn’t work out, but it was a good experience,” he said. “It was something I’d never done before. It was my mistake, and I can’t blame anybody else for it but me.”

He’d like to attend culinary classes through the VA’s vocational rehabilitation program. When Cochran found out about his new income on Thursday, he thought about what he would spend his first check on.

For sure, a cowboy hat and boots. And a dog bone as big as Cookie. But maybe, for now, the two would hop on a bus to Cracker Barrel and share a tender pot roast.