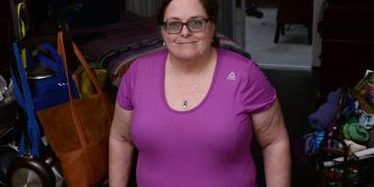 In the first real home she’s been able to call her own in about a decade, Army veteran Melissa Degnan apologizes for the narrow entryway, blocked by a couple of cardboard boxes stacked there, noting that she’s still getting organized after moving in a few months ago.

Today, in her own permanent studio apartment at the Villages at Cabrillo, Degnan is proud to offer guests a cup of coffee or a home baked muffin from her spotless kitchen. A sepia-toned photograph of her late mother and father, a Navy vet, sits nearby on a neat makeshift bookshelf of milk crates.

Moving into her own place hasn’t been easy — it’s taken assistance from multiple collaborating agencies and as many years (more than four) as she was homeless for her to work her way to a permanent home.

The average time it takes for a veteran to find permanent housing in Long Beach is roughly nine months. For Degnan, her case took longer and was further complicated by some physical and mental health issues, including suicidal tendencies and post-traumatic stress disorder that had gone untreated while she was homeless.

“I believe I’ve had mental illness all my life but didn’t know it,” Degnan said now, stressing the importance of the medical help she’s found at the VA Hospital.

Connecting with the VA Hospital also helped Degnan see that she’s not alone. Veterans commit suicide at a higher rate than civilians, averaging a rate of about 35 in 100,000 compared to 26 per 100,000; and suicide rates for homeless veterans are even higher, at 81 per 100,000, according to the U.S. Department of Veteran Affairs.

On a daily basis when she’s needs it, support groups at the VA Hospital help her talk through past traumas, including how she felt as the caretaker of both her parents, giving up her job as a registered nurse to take care of her mother as she was dying of cancer in 2003, and then her father’s passing in 2009.

She said she’s been able to analyze and try to make sense of behaviors she never realized were unusual before: such as the way she used to collect hundreds of toothbrushes and hoard them in the trunk of the car she lived in.

“I was feral in a way I cannot describe,” she said, sharing that what brought her back in from the wild, so to speak, was a simple act of kindness: She shared a foggy memory of a time in early 2016 when someone with Volunteers of America took her to a fast food restaurant for the first hot meal she’d eaten in years.

“They bribed me with a burrito, and it was real good,” she said with a smile, recalling how she must have told them about her time spent abroad as a captain in the Army, having enlisted at age 17 and serving in the ammunitions and explosives field at stations around the world for 16 years.

Volunteers of America connected her to resources and informed her about specific housing vouchers and other assistance available to veterans. Somehow, she filled out the right paperwork to establish her eligibility, and then she was given a transitional bed at the Villages at Cabrillo, through U.S. VETS.

It’s taken almost another four years of adjustment in that transitional bed — plus counseling, support groups and prescribed medication from the Veterans Affairs Hospital — for Degnan to relearn how to live indoors. That’s how she recently gained a permanent apartment at the Villages at Cabrillo.

“It was like watching someone learn to walk again,” U.S. VETS Executive Director Brenda Threatt said about the hard work Degnan had to put into readjusting. “She took a lot of handholding because she was very fragile and frightened, but now she’s a role model for others — she even volunteers as our receptionist and greets the veterans coming in.”

The hardest part for Degnan wasn’t getting off the streets, it was staying off.

“I was in bad straits when I first got here,” the 63-year-old vet said about her move into transitional housing facility after living mostly out of her car for more than four years. “I didn’t remember how to do basic things… I’d forget about the stove and start fires.”

Threatt said it’s difficult for chronically homeless vets — even after they accept help and identify income sources, such as disability pay — to adjust and not fall back.

There are an average of 800 veterans receiving services from U.S. VETS today, with nearly 600 in permanent housing and 200 in transitional housing, Threatt said. The success rate of those who achieve permanent housing where U.S. VETS leases space from Villages at Cabrillo is 87%, and Threatt credited that figure to the safe environment of the community there and other support systems in place, even things as simple as group yoga and writing workshops.

Degnan has made herself part of the Villages at Cabrillo community, waking up before sunrise every day and stepping out onto her patio adorned with stacked succulents, potted geraniums and rocks inscribed with “love” and “joy.” There, she sits and reads novels and solves puzzles to keep her mind sharp, and she enjoys the company of neighbors passing by — mostly other military veterans who engage in friendly banter in the shared courtyard.

Today, a friend with a Chihuahua perched on his shoulder comes by to say hello and borrow an iron to press his shirtsleeves. Two men in wheelchairs wearing matching ballcaps smoke a couple of cigarettes. And one black-and-white shorthair cat rubs the full length of its body against Degnan’s legs.

“That’s Shorty,” Degnan said about the formerly feral feline she’s been feeding and letting into her house to sleep at night. And the parallel between Degnan and her cat, two wild and homeless beings finding permanent place to call their own, doesn’t escape Degnan — in fact, she believes it’s why they found each other.

“That cat doesn’t like anybody else, but we get along,” she said.