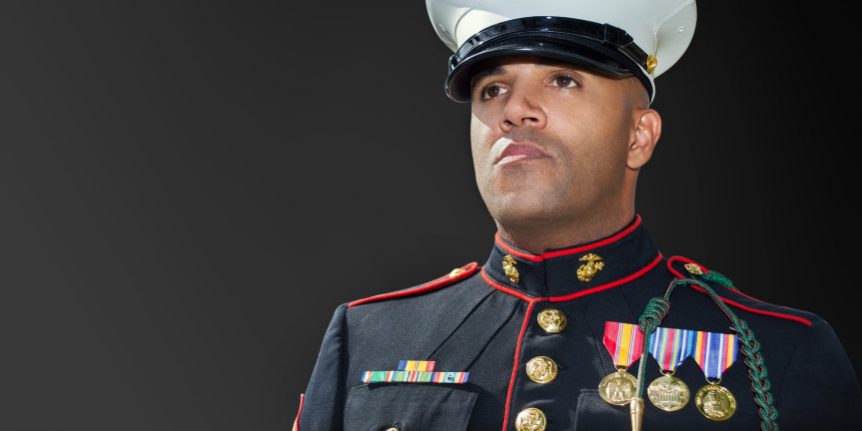 This article was posted by The Orange County Register on December 21, 2018.

Next to a Marine singing about overcoming PTSD, Santa Claus gives presents to a line of children. And while the combination may seem incongruous, it doubles the Christmas spirit.

Elliott McKenzie stands on a small stage next to Santa and faces a crowd of several hundred veterans, spouses and children. Then, with much courage and much honesty, he bares his soul in song.

“Adrenaline’s pumping, heartbeat’s thumping, I’m in flight or fight mode, heartbeat’s racing, then I get angry, must kill the enemy.

“But then I realize I’m back home.”

It’s certainly no Christmas carol, yet with McKenzie’s Usher-like voice, his melodious phrasing and his journey from hopelessness to hope, the confessional song fits the occasion.

The kids in line for Santa are the children of military men and women and most understand the sacrifice, the danger and even the aftermath of war. Many have come to understand that for veterans such as McKenzie, the cost continues long after the battle is over.

Still, on this night, flashbacks aren’t an issue. McKenzie, now 34 years old, forewarns his military audience that one song features the sound of gunfire and, besides, “singing is my therapy.”

In this place where a Christmas tree stands tall before men with Purple Hearts on their chest, the air is filled with love, charity and rebirth.

Different kind of Christmas party
The date is Dec. 15. The place is the Garden Grove Community Center and I am here to receive a Veterans Administration Community Partnership Award. Jack Brito, a Vet Center director, says something about supporting “all veterans and active duty personnel.”

But let’s agree that my new hunk of red, white and blue acrylic — while much appreciated — is dwarfed by the commitment in this room to courage, honor and duty.

I happen to be at McKenzie’s table and we strike up a conversation. Small talk quickly evaporates and we quietly fall into a serious discussion about things most people only share in private — things such as killing other humans, losing close friends in battle, suicide.

Too soon, however, it’s time for McKenzie to take his place as entertainer of the evening.

Days later, we circle back and I mention his song, “Gunshots,” still flows through my mind. McKenzie smiles.

He tells me he wrote “Gunshots” for and about veterans who suffer post-traumatic stress disorder. He prays it helps, and I allow his lyrics likely travel farther than he knows.

McKenzie asks about another song he wrote called “Fight Back.” He hopes it helps everyone who struggles with depression to overcome inner adversity — active duty, veteran, non-veteran. Here’s a sample and remember, think of an R&B crooner:

“You’ve been winning but now I’m gonna fight back, it’s that time that I’m gonna take my life back, you can come or you can go but I guarantee that I’m never gonna turn around and look back.”

It’s a mature song for a budding artist. Yet there is much more to McKenzie. His day job is serving as a counselor for veterans. And then there’s the brown silicone ring on his pointer finger.

“Oh, that’s my trigger finger,” the retired Marine says. On the ring there are two numbers and a single word: “22 Kill.”

For most, “22 Kill” is a reminder of the number of veterans who, on average, take their life every day. For McKenzie, it’s a silent reminder not to take his own life.

“I never take it off,” the Marine explains, “so I keep in mind that day when I decided to kill myself.”

Rock bottom
McKenzie grew up in Cerritos playing drums. Along the way, he started singing and friends and family told him he had a great set of pipes. At Gahr High School, he was a standout football player as well as a standout singer in the school’s gospel choir.

But more than anything, McKenzie wanted to be a Marine. “It’s about being the best of the best.”

Five days after McKenzie graduated high school, he enlisted. At boot camp in San Diego, his drill sergeant every Sunday ordered him to sing R. Kelly’s “I Believe I Can Fly.”

The song accomplished two things: It taught McKenzie to obey orders, no matter how, um, unusual. It also inspired.

But in February 2005, life changed forever. That was the month McKenzie embedded with 1st Battalion, Fifth Marines, also known as 1/5, and was deployed to Ramadi, Iraq.

By the time McKenzie’s tour of duty was over, he had survived a series of firefights, had a concussion from an IED explosion and 16 of his fellow Marines as well as his company commander, Capt. John Maloney, were dead.

The strange thing about combat, however, is that as terrible as it is, coming home can be even more difficult. That is when camaraderie is gone and nightmares begin.

In 2007, McKenzie returned home to his mother and brother in Cerritos and — like many enlisted Marines — found a job as a security guard.

“That’s when things started to go downhill,” the Marine admits. “I had really bad anger issues. If somebody wasn’t listening to me, I’d scream at the top of my lungs. I wasn’t comfortable in crowds, and sometimes I couldn’t hear myself think.”

Mom said no more after McKenzie got into a fight with his brother and threw a knife that cracked the television. A police officer who was former military offered the young Marine two options: be charged with assault with a deadly weapon or agree to go to the Long Beach Veterans Hospital.

For three days, the VA hospital held McKenzie on a 5150, a danger to himself or others. Then he was released.

“I ended up homeless, no friends, no family members,” he recalls. “I lived in my car for a week.”

Fortunately, the VA helped McKenzie connect with a nonprofit called U.S. VETS. For more than a year, he stayed in transitional housing in Long Beach, driving to security jobs as far away as the Beverly Center.

But for the next five years, McKenzie lived in what he calls his “gray area.”

“I couldn’t figure out what I wanted to do with my life,” he says. “I went from job to job. My life was just frozen in time.”

Question of life or death
Eventually, a former girlfriend suggested he use his GI Bill to attend college and McKenzie enrolled at Mt. San Antonio College in Walnut. But he had zero confidence and torpedoed his chances to succeed by continually switching up his major and missing class.

“My anxiety and depression were so bad,” the Marine bravely acknowledges, “I stayed home crying.

“I felt separated from my family and saw my friends from high school getting married and having kids. I felt like a failure in life as a 28-year-old guy working security and making $10 an hour.”

On top of day to day depression, McKenzie also remained ensnared in memories of Ramadi. “I had survivors’ guilt and was addicted to adrenaline, constantly driving at 90 to 95 miles an hour.”

“I wanted to either shoot myself,” McKenzie says, “jump off a building in downtown Los Angeles or drive into a wall.” The Marine settled on driving into a wall.

One day driving from Hollywood to his apartment in Pomona, McKenzie, as he puts it, “started bawling my eyes out.

“I was a second away from jerking the wheel.”

But just then, McKenzie thought of his dog, Romeo, a small Italian greyhound. “If I die,” he realized, “no one will be there to take care of Romeo.”

Recalling that moment on the freeway, McKenzie, paradoxically, shakes his head. “I never had the guts to do it.”

But let’s flip that. The Marine had the guts to live.

Finally, McKenzie decided to visit a Vet Center for help. He ended up at the center in Corona where he spent two years in therapy sessions.

His therapist, a former military sergeant, explained that during his time in Iraq, “Your adrenaline levels were constantly pumping because you could be shot any time. But when you came home, your brain didn’t know how to turn that pump off.”

To slow the adrenaline pump, McKenzie returned to music, dusted off his home studio, launched a website, ElliottMcKenzie.com, watched as “Gunshots” climbed to 27,000 views on YouTube and began to find peace, even joy.

He graduated Mt. San Antonio College, went on to earn a bachelor’s degree at Cal State Dominguez Hills and returned to U.S. VETS — but this time as a Los Angeles counselor.

McKenzie estimates he’s already performed some 70 gigs. Sure, some were for little pay, others are open mike nights at clubs. But the Marine makes clear that while he hopes his music career takes off and in the spring will launch his debut album, “Therapy,” it’s not about money.

It’s about making a difference, about helping people learn to live.

“You’ve been winning but now I’m gonna fight back,” McKenzie softly sings. “It’s that time that I’m gonna take my life back.”

A different kind of Christmas carol.