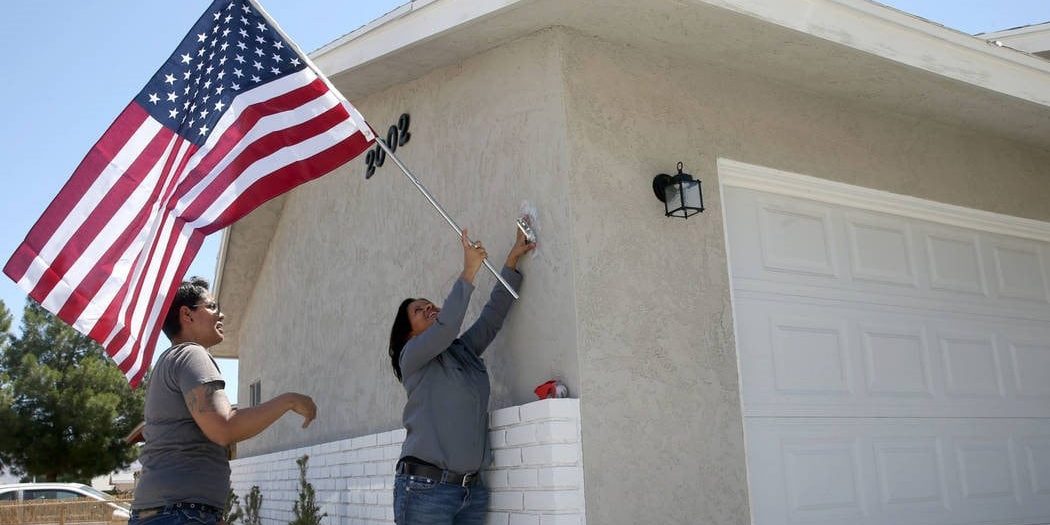 This article was posted by the Las Vegas Review-Journal on April 26, 2019.

She had the key, and now it was time for one more thing. The brand-new American flag, still bright and shiny and creased from packaging.

Carrying it to the outside of her new home near downtown Las Vegas, Ana Martinez attempted to erect the flag on the tan house with white finish. But she didn’t have the necessary tools.

Laughing, the 52-year-old veteran used packing tape to secure the metal plate to the wall. As the flag came up, so did the tears. And when the tape didn’t stick, Martinez held onto the flag tightly.

“A lot of people don’t make it back. … They just don’t have an opportunity to live their life and continue giving,” the Army veteran said through her tears. “It’s just a little emotional for me.”

It was the first thing she did Friday morning as a first-time homeowner.

She was determined to put the flag up and to start up the stereo in her living room.

Only two years earlier, she had been homeless, living in her red two-door Mitsubishi Eclipse and working as a chief warrant officer with the U.S. Army Reserve Center in Sloan.

She retired from the position in November after 27 years, deciding she could not provide what was needed to do her job while she was battling post-traumatic stress disorder.

But she had finally saved enough money to buy the house and was officially moving in with her partner, Lydia Luna.

“It’s a surreal moment. I lived in my car, I used a Big Gulp cup as my bathroom, and now I’m walking into a home,” she said with a smile Friday morning.

Her three-bedroom, two-bathroom home was filled with natural light that poured in through the large window facing her patio.

As Martinez and Luna walked around the living room and admired the white brick fireplace at the center, they pictured the memories they would make in their new home.

When they first met more than two years ago, Martinez was stationed in Los Angeles and living in her car. For months, she didn’t tell Luna; they would rent hotel rooms.

“It’s not something that I would share with anybody because I was embarrassed,” Martinez said. “In the military, you’re normally trained to suck it up and drive on.”

Not even her two grown daughters knew their mother was living in her car.

To cope with post-traumatic stress disorder, Martinez started gambling in Southern California, and when she moved to Las Vegas, the problem escalated. She struggled to pay rent and decided to move into her car so she would have more money for her addiction. She estimates she lost more than $100,000.

“Instead of drugs, I wanted that escape,” Martinez said.

While living in her car, she would park at a police station or at the VA Medical Center in North Las Vegas.

She’d blend in with the other cars and put a towel over her head when she used her electronics. She was always on the lookout for security guards through her tinted windows.

She showered and brushed her teeth at 24-Hour Fitness. In a cooler, she would keep drinks, water and frozen meals that she would heat up in a 7-Eleven microwave.

In the winter, she used her Army sleeping bag to keep warm. In the summer, she’d crack the windows just enough. Her trunk was her closet. It’s where she kept her shoes, her uniform and her clothes.

“They never knew my circumstances,” she said. “I’d put the mask on. But behind the mask was a sad face.”

Martinez, who said she was a victim of military sexual assault early in her career, was training soldiers who were going overseas. She would hear the stories of those who came back hurt, or those that did not come home at all.

“It goes back to that mentality that it’s not that bad and you push your threshold. We endure so much,” Martinez said.

As the sexual assault coordinator, she relived her assault each time she investigated and listened to the stories of men and women who had been assaulted.

“It awakened what I had tried to suppress for so long,” she said. “It happened, and I tried to muffle it and squash it.”

After a general she knew committed suicide, Martinez realized she needed help. Before that, she had been worried her superiors would take away her stature or her weapon.

“That was the moment I knew I had to morph, to change something. Before, I thought that I was an officer, and I couldn’t be the one to crumble,” she said. “We’re trained to be survivors, to be resilient, but being strong is also asking for help when you need it.”

While she was still enlisted, she went to US VETS, where she started attending counseling and was set up with housing, sharing a room with five other women.

The organization helped her find a two-bedroom apartment on East Bonanza Road in June 2017 through the HUD-VASH subsidized housing program.

On Friday morning, as she and Luna stood in their kitchen, they talked about how excited they were to pop Champagne in their new home.

“I’m so proud of you, what you have accomplished,” Luna told her. “She told me she would do it and she did.”

Martinez, who starts studying social work at UNLV in the fall, said her next step will be to help other veterans who might be in the same situation she was in.

“I want to help someone else like I’ve been helped,” she said.