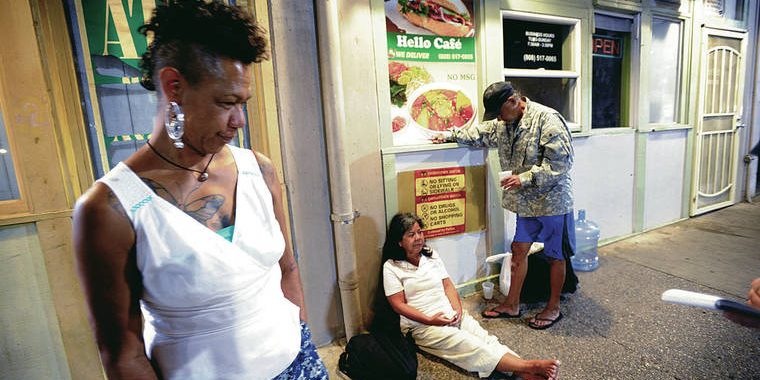 This article was posted by the Honolulu Star Advertiser on May 18, 2019.

Since the Honolulu Star-Advertiser’s five-part series on homelessness in Chinatown began running this week, life already has changed for at least one of the people featured who had been on the streets for 17 years.

Laurice Alapai twice got help to move into homeless shelters, but each time it never worked out.

Alapai, 46, told the Honolulu Star-Advertiser one night last month on North Pauahi Street that, “When you’re out here a long time, it’s hard to acclimate to rules.”

But Alapai’s social workers, like so many others working to help Hawaii’s homeless, refused to give up.

So on Monday, Jovie Espinueva — a housing intake specialist for the Hawai‘i Health & Harm Reduction Center who also works with Catholic Charities Hawaii; and Nicole Ward — a substance use outreach worker with the Hawai‘i Health & Harm Reduction Center — picked up Alapai under a bridge near Chinatown and drove Alapai to her new, temporary home in the Villages of Maili.

The social workers told Alapai, “get in my car,” Alapai remembered.

Alapai loves her new apartment and sounded optimistic about her future on Thursday after four days in her new home.

“Here I’ve got my own little space to myself,” Alapai said. “I have a bathtub with hot water. It’s my very own. It’s beautiful.”

But it’s only temporary because on June 21 Alapai is schedule to move into a new, one-bedroom Housing First apartment that’s still under construction in the Ward area.

Housing First is a nationwide program aimed at housing America’s chronically homeless — some of whom have addiction and mental health problems — into market-rate homes, where landlords are guaranteed rental payments and can call social workers for any problems.

Tenants typically pay 30% of the rent, usually from their government benefits.

Because Alapai has no income, Catholic Charities Hawaii will cover Alapai’s share of her $1,400 a month apartment while social workers help her apply for government benefits, Espinueva said.

Alapai said that her move from the dirty streets of Chinatown to a hot bath of her own is the result of social workers such as Espinueva, Ward and others who refused to give up on her.

“They have to be persistent,” Alapai said. “Fortunately I have people on my side who are persistent.”

She called her social workers “a blessing from God.”

Alapai said she was initially reluctant to move off of the streets because of her 4-year-old, pit bull-mix dog, Sanka.

She had been offered help through two programs featured in Wednesday’s Star- Advertiser called H.E.L.P. Honolulu, which stands for “Health Efficiency and Long-term Partnerships,” and LEAD, or “Law Enforcement Assisted Diversion,” which pair up social workers from 30 different social service organizations with Honolulu police and state sheriff’s deputies.

“HELP primarily focuses on outreach and transportation for homeless individuals to shelter or to drug treatment facilities (e.g., Hina Mauka, Salvation Army, etc.),” Morishige said in an email Thursday. “The focus is making connection to a longer-term program, and assisting with the transportation piece. LEAD is a more intensive case management program, which receives referrals both from HELP (HPD) and from the Department of Public Safety/Sheriff Division. Another key difference is that HELP is islandwide, while LEAD is focused just on Chinatown/Iwilei.”

“Laurice was encountered by HELP in October 2018 and helped her get to a shelter and also connected her to LEAD,” Morishige said in a text message Thursday. “LEAD then took over the case management after the initial outreach efforts by HELP.”

In an email, Morishige wrote that, “I actually have a thank you letter Laurice sent me a few months ago that I keep in my office as a reminder of what it takes to help someone successfully transition off the streets and into housing — it is not always a fast journey, but it is rewarding to hear when the placements are successful and the difference it makes in people’s lives.”

One of those helped by both programs was Aurelius T. Warren, 63, who was invited to speak at a news conference Wednesday at the city’s new Punawai Rest Stop in Iwilei.

He had served 13 years in an Arizona prison for cocaine possession and promotion and was homeless in Aala Park in 2018.

Morishige said that Warren “was initially encountered during a HELP Honolulu night outreach event in August 2018 and was then connected to LEAD for longer term case management.”

Or, as Warren put it:

“Society had forgotten about me,” he said. “Look at me now. Dr. Christina saved my life.”

“I had been running in and out of Chinatown since the ’70s,” Warren said. “I was sleeping in doorways and eating out of garbage cans. Now my blessings don’t stop.”