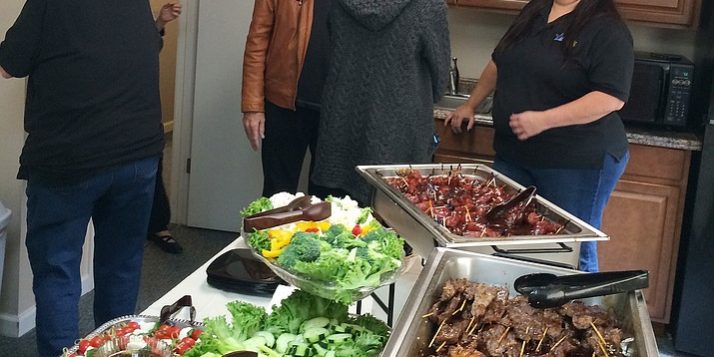 This article was posted by The Daily Courier on January 21, 2019.

For 16 years, U.S. VETS Prescott has been housing homeless veterans, either through its transitional living complex that expanded this year or through independent housing with case management supports.

On Jan. 16, the agency hosted a celebration at its Gurley Street offices, one expected to be the last in its present location. Veterans participating in the agency’s culinary program provided all of the refreshments.

By late summer, U.S. VETS officials expect to relocate to a new $8 million complex on Whipple Street that will provide 150 units of housing, 76 beds in 27 units of transitional housing with the remainder to be long-term studio apartment rentals for single adults. Of the studios, 15 will be transition-in-place apartments attached to a year’s worth of case management before the tenant is then able to live independently. The remainder of units will be priced affordable enough to meet federal housing subsidy guidelines; any of those units not needed by veterans can then be offered to other homeless individuals. The complex will also have commercial kitchen, an on-site day center and counseling spaces with management offices.

“I’m excited for our vets,” said U.S. VETS Executive Director Carole Benedict of this private/public partnership. “It’s a renewal. It will make them feel as if they are moving on.”

One U.S. VETS supporter was effusive in her delight over what she said is such a “novel” project for a rural community. Most often, these types of projects are only found in major metropolitan cities.

“This is really incredible,” said supporter Carolyn Lee whose husband, Dennis, is a veteran as is their son, Brandon.

Lee, too, was impressed that Benedict has even more ideas to house even more veterans.

Benedict’s latest efforts are to secure the federal funding required to transform the existing transitional complex — a converted motel on Gurley Street — into housing for senior veterans who require affordable assisted living care. Her hopes is to be able to offer between 22 and 30 such units.

In February, Benedict said she will be participating in the national organization’s strategic planning session. She expects she will know more about funding for the senior veteran project, as well as any other new initiatives, at that time.

Asked about the impact of the federal government’s partial shutdown, Benedict admitted it is impacting reimbursements for some of their rental housing properties. U.S. VETS Prescott offers 21 scattered site apartments as well as the 76 units of transitional housing. As of last week, U.S. VETS said it has had to cover some $60,000 of federal subsidy payments. She said that is being covered through community contributions as well as emergency operation plans through the city. She said the hope is the government shutdown will end shortly, and payments will resume on schedule.

Categories: In the News, Locations, PrescottJanuary 21, 2019