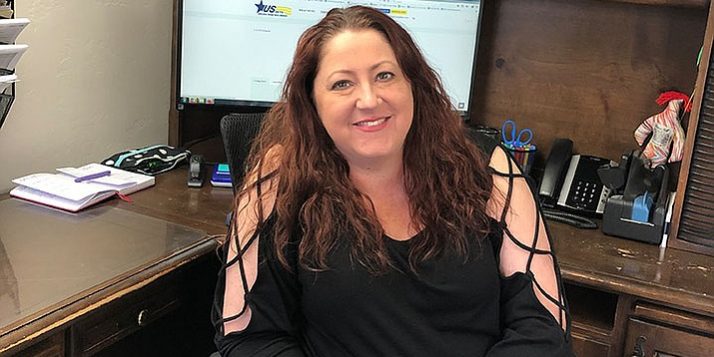 This article was posted by The Daily Courier on December 21, 2019.

With U.S. VETS Prescott about to open its new Whipple Street campus providing more 111 transitional and independent living housing units for homeless and at-risk veterans, Operations Coordinator Skye Biasetti is ready for her promotion to the parent agency.

One of the best parts of her new role as U.S. VETS national quality assurance director is her office will be in the new Prescott headquarters. She will, though, no longer be part of those daily operations.

Instead, the three-year U.S. VETS Prescott leader who has helped shape and expand the agency’s mission to care for homeless veterans in the local community will be traveling to the national non-profit organization’s 10 other programs in Arizona, California, Hawaii, Texas, Nevada and Washington, D.C.

The 42-year-old who with her husband, Obe, have three young adult children — Anthony, Aubrie and Chris — is excited to be able to essentially create a new department aimed at assuring a standardized quality of care at all of the different U.S. VETS campuses.

The job description is broad and varied, but focuses a lot on educating staff to meet quality control standards and improve performance in all aspects of the organization, everything from clinical operations to finance and housing development. She will examine areas that require adjustment and change, tracking those outcomes so that they comply with the organization’ national standards.

Biasetti will also analyze financial auditing practices so that they meet agency and donor expectations.

All in all, Biasetti’s new role will be to help each program site function at the highest level so as to fulfill its duties to all involved in servicing their clients.

She sees the ability to still work at a local campus as a plus, as it will enable her to still interact with those who benefit from the agency’s services. She said that will “keep her grounded in the foundation of what we do.”

She appreciates the chance to use what she has learned to create the best ways to fulfill the agency’s mission. Before her promotion, Biasetti was tapped to help the Houston program while it was searching for a new operations manager.
“That was a stepping stool to this position,” Biasetti said.

Though much of Biasetti’s work for clients is behind-the-scenes, Biasetti is well known to other homeless and affordable housing advocates for her lead role in the annual “Stand Down” project for homeless veterans. The two-day, one-stop shopping venture for these veterans has become a signature event where local non-profit agencies, businesses and the Prescott VA perform outreach to veterans to assist with their needs.

Biasetti said she is “super excited” for the challenge of her new role.
U.S. VETS Prescott Executive Director Carole Benedict assures she is the right person for the job.

Yet, she is clearly saddened to lose a valuable member of her leadership team, an esteemed colleague she also counts as a friend.

“There isn’t anyone more suited for this role,” Benedict said. “She will excel and help others reach the standards that we all strive to achieve.”