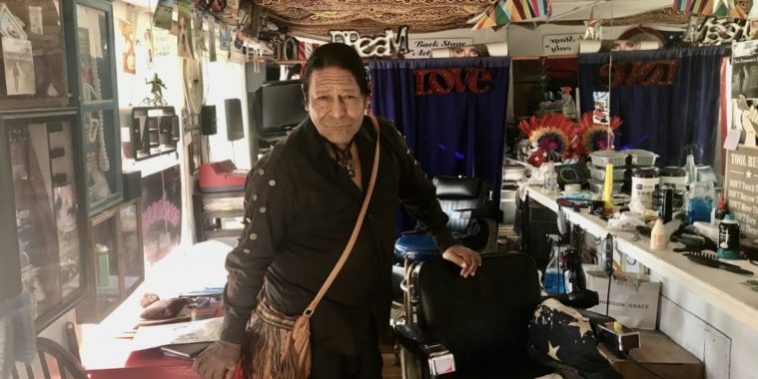 This article was posted by laweekly.com on November 11, 2019.

With two large hospitals, numerous administration buildings and living quarters, two theaters, a baseball stadium, golf course, a botanical garden, and its own cemetery, the V.A campus in Westwood is a city within a city.

What started as the Sawtelle Disabled Veterans Home in 1988 with Rancho San Vicente y Santa Monica land deeded by Arcadia Bandini de Baker, Sen. John P. Jones and John Wolfkill, and once home to 5,000 vets, has since deteriorated into a crumbling ghost town of abandoned buildings. Thanks to U.S.VETS, the nation’s largest veteran services nonprofit, and the funds they’re raising, that’s all going to change in 2020.

The massive 10-year, three-phased project to get homeless vets off the street, will start by restoring five buildings on the northern campus that have been abandoned for decades in phase one and then move on to the southern campus in phase two. There will be a town center, new administration building for case management and employment on the nearly 500-acre property divided by Wilshire Boulevard.

“The first structure we’re going to renovate, together with Century Housing and Thomas Safran & Associates, is building 207 on the northeastern part of the campus,” U.S.VETS president Steve Peck told L.A. Weekly last week at the organization’s Salute Gala to support the major veteran housing initiative that will ultimately provide 1,200 living units. He estimates the cost at about $900 million.

“That will be for senior veterans, one of the fasted growing populations among homeless vets. We’ll continue to develop the northern side of the campus near the new hospital which will be the hub area. All the empty decaying buildings are going to be renovated. It’s a historical district, so we can’t knock them down. When you take a close look at them past the weeds and the bushes, some of those buildings are just beautiful.”

If there’s anyone who looks forward to watching the phoenix rise from the ashes it’s Tony Bravo, a local legend who cuts soldiers’ hair out of the trailer he grew up in on a ranch in New Mexico, and the only “business” located on the campus. Known to generations of vets and locals as the Dreamer, the Vietnam Vet with Apache roots has been a fixture on the campus for 50 years.

Bravo served during the Vietnam War, training soldiers for battle. After the war the Dreamer wanted to give back in the best way he knew how, cutting hair. He’d truck the trailer in from his home and give a week’s worth of free haircuts to the guys, then hitch it back up and leave. It’s found its permanent spot on the north end of the campus for the past 20 years and is considered a safe “bridge between two worlds,” and haven for all vets — including those who are homeless — to come in for a cut and much needed validation.

According to Bravo and his Native American roots, he’s known as the Dreamer because of his birth order. The first born is the flagship of the family and the leader. The second is always the rebel spirit. The third born is considered the dreamer, an objective observer. He’s seen the first born go to the right and the second born go to the left. The third is an offspring necessary to bring a direction and forecast for the family and above all, be flexible in the eye of the storm.

“The developer himself, Tom Safran stepped into the trailer one day, looking for the blessing from an elder,” Bravo tells L.A. Weekly as the daily stream of ’60s music plays throughout the trailer and a young soldier gets a shave in one of two barber chairs. “He also wanted to see if I was flexible.”

“I love the guy and think he was brought in as divine intervention,” Bravo says. “We all have a valid time on this earth as entities in the universe. It’s possible that we can share that ground with equal value. We are all here for the same reason — to make this place better. I embrace it all. The doctors here are some of the best in the world. We are at that pinnacle to really do something spectacular. This campus is a microcosm of the whole planet. Every race is represented here, every culture, every socioeconomic level. I deal with guys who are on the street as well as academia. They all come in here and interface with each other, it’s a beautiful thing. We’re all just trying to make our way. This could be an example for the entire country.”

Founded in L.A. more than 25 years ago, U.S.VETS now has 30 residential sites and services centers across the country, and more in development. With the goal of ending veteran homelessness, U.S.VETS provides prevention programs, focused on jobs and mental health, and advocates on the state and federal level to help service members transition successfully into civilian life.

Funding for the project came from HHH funds, state and bond money, and donations raised from the organization chaired by Jeremy Zimmer of United Talent Agency including City National Bank, The Home Depot Foundation, HBO and other big business. Renovation of Building 207 is expected to commence in 2020, pending an award of tax credits and bonds from the state.

Peck says it’s mostly renovation and six or eight new buildings. There will be a town square on the southern end which will become the center of the campus, viewing alleys to see all the way across campus and close proximity to Metro Purple Line station. Peck also says that the Dreamer will remain on the property.

With L.A. being the home to the highest concentration of military veterans in the country, Los Angeles Mayor Eric Garcetti created the Office of Veterans Affairs in 2013, working in concert with the V.A. on the Westwood restoration.

“In addition to housing, we have to integrate vets back into society,” Garcetti told L.A. Weekly at the dinner saluting U.S.VETS. “Just about everybody is employable and nothing ends homelessness like a job. Whether it’s getting the homeless off the streets or helping those just coming back, the city has set a goal of 10,000 jobs which we’ve already surpassed at 11,000 jobs. Those have been jobs in the studios like Disney and Universal and many IT positions — the modern soldier knows a lot about new technology — and building trades. We’re not just looking for fast food jobs, we’re looking to get them careers. We plan to integrate families into those living spaces as well. Often the trauma is passed within the family, so we want to aid with mental health needs, transportation needs, housing needs. We’re stepping up as a city like you’ve never seen before and the private sector is reaching beyond its grasp to help. We’re lucky we don’t have to build a village from scratch, it already exists.”

Garcetti shares the city’s frustration on the homeless crisis he says has been four decades in the making.

“Don’t lose your impatience, and embrace the patience it will take,” says the mayor, who served in the U.S. Navy Reserves. “We’ve already reduced our veteran homeless population. In four years we’ve gone from 9,000 people housed to 21,000 a year. Don’t despair. There’s no solution that you can get with a snap of a finger, but we’ve made progress and with programs like this there’s proof that we have the answer. When everybody gets involved, we can scale this up and end homelessness.”