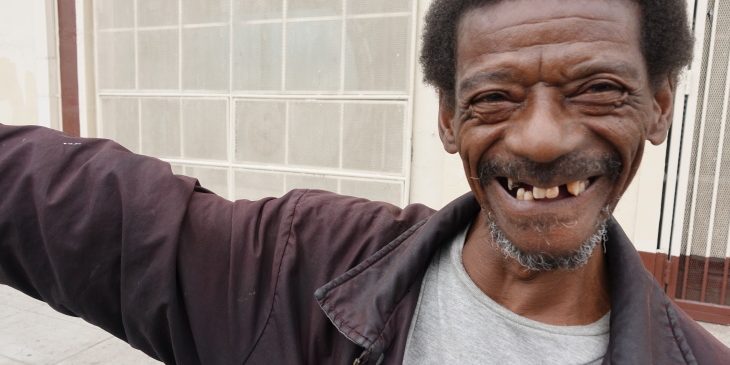 On Tuesday, the county released the bleak results of its annual count of homeless people in Los Angeles.

Overall, the number of Angelenos sleeping on the streets or in temporary shelters increased by a whopping 12 percent — a major disappointment, given the ongoing efforts to address the issue.

But one group saw a modest improvement: military veterans.

Los Angeles housed more than 2,800 veterans last year. But nearly that many became homeless, too, so the population of former service members on the streets dropped by just 12 individuals between 2018 and 2019.

But it’s the second year in a row of headway in the struggle to house the largest population of homeless veterans in the country. The veteran numbers also bucked the trend of increases for other groups across L.A. County. Local veterans housing and service providers like Akilah Templeton have to take the wins as they come.

The numbers are “a work in progress,” said Templeton, who heads the Inglewood branch of non-profit U.S.VETS. “We haven’t put a lot of focus on celebrating victories, and how far we’ve come.”

The work can feel like a Sisyphean task as economic pressures continue to push more veterans off the edge.

TO PUT THIS IN PERSPECTIVE…

In January 2019, Los Angeles Homeless Services Authority (LAHSA) volunteers counted 3,874 veterans living on the street or in cars, tents, and shelters. The 2018 point-in-time count recorded 3,886 veterans who were homeless in Los Angeles County. That was an 18 percent dip from the previous year (2017), when advocates faced an alarming 57 percent spike in the number of homeless veterans.

Vets experience homelessness at a higher rate than the civilian population. About 7 percent of people in the U.S. can claim veteran status, but former service members make up around 13 percent of the country’s homeless population, according to the National Coalition for Homeless Veterans.

Nationwide, there’s been a good deal of progress on housing veterans in the last decade.

The Obama Administration and then-VA Secretary Bob McDonald made ending veteran homelessness a major goal, and recruited local leaders like L.A. Mayor Eric Garcetti to sign up for the effort. Some smaller states and cities — like Riverside — have reported “functional zero” for homeless veterans. HUD’s 2018 Annual Homeless Assessment Report to Congress said the population of vets on the streets — sheltered and unsheltered — has dropped by 48 percent since 2009.

In Los Angeles, there were 6,540 homeless veterans counted in 2009. The latest count represents a 41 percent reduction from a decade ago. But local leaders have walked back pledges to end Los Angeles veteran homelessness entirely. Garcetti said there were simply too many former service members falling into homelessness.

SO WHY ARE THE VETERAN NUMBERS BETTER?

Shanna Nelson, who oversees the homeless outreach team with the West Los Angeles VA, credits more federal funding for veteran rental vouchers and closer coordination between the VA, LAHSA, the county’s Department of Mental Health and other agencies to connect vets to the supportive services available to them.

“Because oftentimes they do engage veterans and don’t really know what to do,” she said, “we make sure that we’re educating organizations, and when they locate a homeless veteran they contact us.” At that point, said Nelson, vets can get help enrolling in VA medical services, pension or disability benefits, and getting housing referrals.

The VA has increased its outreach to hard-to-reach veterans, Nelson said, including more street teams and community events in neighborhoods around L.A.

“Instead of the veteran having to come to the VA, we bring the VA to the community,” she said. “The team is really boots on the ground. They’re the first line to contact homeless veterans on the street or in encampments.”

“They’re able to communicate with them. They’ve been in the same place,” Kincey said. It’s not always easy. “Some veterans don’t trust, because they’ve been taken advantage of. The only thing you can do as a provider is show up when you say you will.”

More local funding for housing homeless veterans is in the pipeline.

“We are doubling down on our investment in housing inventory with a particular focus on veterans,” said Dr. Jonathan Sherin, director of the county’s Department of Mental Health.

Last year, his department added an additional $20 million for veteran housing and supportive services, and it’s in the process of building up a “Veteran Peer Access Network” to help former service members navigate civilian life.

“Our communities are recognizing that it’s absolutely unacceptable for the people who serve and protect our country to be homeless after they serve,” Sherin said. “That’s beginning to resonate not just as a talking point, but in terms of resource allocation.”

The biggest difference between the vet and civilian homeless population? A lot of federal funding dedicated specifically to helping veterans get back on their feet.

Back in October, the Department of Veterans Affairs announced a boost for permanent housing for chronically homeless veterans in Los Angeles. More than 700 additional HUD-VASH vouchers were added to the Los Angeles VA’s catchment area, bringing the total to nearly 7,000 rental assistance vouchers for vets.

Those vouchers offer no guarantee of finding a place to live, however. In L.A.’s highly competitive rental market, many veterans can have trouble finding landlords who will work with them. Vouchers expire if they aren’t used, generally in 120 days.

“It really is up to [VA] to do the warm handoff, check in, assure the property owners that we’re available to assist,” Nelson said.

In the city of L.A., there are currently 2,752 HUD-VASH vouchers in circulation. Most of those are veterans in apartments, using the subsidy to pay rent. About 130 veterans with vouchers are still looking for housing, according to Carlos VanNatter, Section 8 Director at the Housing Authority of the City of Los Angeles.

Los Angeles County has a total of 2,692 HUD-VASH vouchers, but unlike in the city, many of those veterans are looking for housing. Numbers provided by Debra Solis with the Los Angeles County Development Authority indicate over 1,900 have a voucher in hand, but are stuck apartment hunting.

The VA also funds beds in transitional housing facilities through its Grant and Per Diem program, and offers short-term financial assistance for low-income families through the Supportive Services for Veteran Families (SSVF) initiative. Both programs “are unique to veterans and have been critical to enabling veterans to secure and retain permanent housing,” Ansell said.

“This success with veterans really emphasizes how resources are critical in enabling families and adults to move from homelessness to permanent housing,” he said.

SHIFT TO A ‘HOUSING FIRST’ MODEL

Templeton says we may also be seeing the fruits of a longer-term shift to the Housing First model within the VA. The idea is to lower barriers to services and to get homeless veterans into housing as quickly as possible, so they can work on their mental health or addiction recovery from a stable position. Veterans aren’t evicted from housing the first time they fail a drug test.

The HUD-VASH program adopted Housing First as its official policy in 2012 after an extensive pilot program.

“You used to have to be clean and sober, with at least 90 days of sobriety under your belt,” Kincey said. “The VA has moved to a ‘low barriers’ approach to housing — and that has helped get more people into programs.”

The U.S.VETS Inglewood facility receives VA funding for some of its 600-plus transitional and permanent housing units. There are house rules: no drugs and alcohol in the facility, but vets don’t get kicked out for a positive drug test.

“We’re keeping them, we’re working with them and giving them a better chance at being successful,” Templeton said.

The project that could take the largest bite out of the remaining veteran homeless population is still in the planning stages on the West L.A. VA campus. At least 1,200 units of permanent supportive housing are included in the Master Plan to overhaul that 388-acre federal facility in Brentwood.

[READ MORE: Everything You Need To Know About The Massive, Decaying West L.A. VA Campus — And The Plan To Fix It]

Before moving forward, that project is pending its final environmental review. Construction and renovation will take some time. The next round of permanent supportive housing units on the VA campus isn’t expected to open until the beginning of 2021.

There is a 100-bed bridge housing facility slated for the VA grounds, part of Mayor Garcetti’s citywide initiative, but that construction has slowed down because contractors hit a pipe full of asbestos last year. The VA and City Councilmember Mike Bonin’s office say the temporary beds, first slated for Spring of 2019, should now open in late summer or early October.